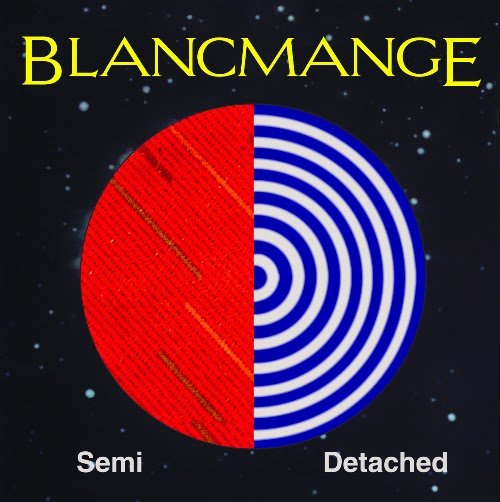 A lot has been said about Semi Detached, and quite rightly so.  Since the return of Blancmange with 2011s Blanc Burn the band have made their intentions quite clear in that there was unfinished business following the original disbandment after their Believe You Me album back in 1985.

There were clearly second helpings still to be enjoyed, and although Stephen Luscombe has not made any live appearances on the current Blancmange incarnation he has clearly had input.  On this, the fifth Blancmange album proper (not including the recent remake of their debut album which was  renamed Happy Families Too), Luscombe plays no part leaving Neil Arthur to take the reins.

Arthur’s Northern quirk is present throughout Semi Detached though the overall feel is darker.  Brooding through ten tracks there’s a feel that the Blancmange sound still has much to offer.  In terms of composition it’s probably most akin to the 1985 bow-out as songs feel slightly looser whilst remaining clinical sounding and impeccably arranged.

Opener, The Fall is a dissection of the London Underground, lost love and clutching tickets to see Mark E Smith and his crew.  It’s unassuming, and on first listen possibly a peculiar start to the album, but on subsequent hearings (and, there will be many of Semi Detached) it becomes apparent that it is well thought out.  Maybe a call to Luscombe and the friendship than began over thirty years ago, it flows from humble beginnings to an eight minute overture slowly easing in the listener.

The version of Can’s classic I Want More pays tribute to the German experimental rock band in the form of their only UK hit.  It’s perfect for Arthur to interpret the madcap approach and repetitive chorus in with a modern day twang and the infectious quality of the single could possibly be a future single release if widespread recognition is what he so desires.

Current release, Paddington a song about the tube location and not the bear, pulls together random images of London and has a musical hook with a sound not unlike Living On The Ceiling the track that will probably keep Neil in Ewood Park pies for the rest of his life.  It’s a well-constructed poppy affair, as is the bulk of the album, showing the darker side of the man whilst maintaining the mainstream prowess.

The instrumental MKS Lover begins with a nod in the direction of synth classic Being Boiled and displays the multi-layered, looped sound to which we have been accustomed to.  Semi Detached is a huge progression from Arthur’s last (and debut) solo album Suitcase though yet again utilises the assistance of Adam Fuest who is at the mixing desk this time round.  Another regular is David Rhodes whose effective guitar playing has almost always been a feature of Blancmange’s work.

Like I Do and Acid delve into dance oriented territory and provide more opportunities for radio airplay.  Album closer, Bloody Hell Fire is a superbly atmospheric piece of tired dispassion and self-pity.  Arthur’s vocals are as fine as they have ever been and show a side that many may not have encountered before – beautifully haunting.

Semi Detached is a modern day riposte to the Blancmange of the 80s.  Still catchy, still infectious but now all grown up.  The journey will no doubt continue, but for the moment this could the acts finest album to date.