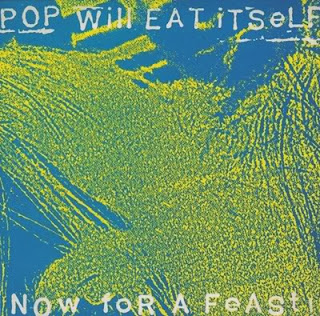 80s alternative rock band, Pop Will Eat Itself, have their 1988 compilation re-released by Cherry Red.

The late 80s spurned a clutch of anarchic sounding alternative pop rock that seemed, for a couple of years to fill a wanting in British music.  Pop Will Eat Itself, Jesus Jones, Ned’s Atomic Dustbin, Carter USM and The Wonder Stuff (who’s lead singer Miles Hunt was drummer for an early incarnation of PWEI, From Eden), gave us explosive, carefree, sometimes comical music which had the acclaim to dominate but never really got beyond that.  Sure, they tickled the top end of the charts at the time, but their legacy is probably more important now than the groups were at the time.

PWEI were/are underrated.  Fact.  Their blend of stark and incisive comment and wit has long since departed and there really is nothing to compare nowadays.  Their mix of hip hop/dance/rock (which was polished and perfected for the Charts by Wiltshire boys Jesus Jones) gave a raw, almost punkesque feel to potentially great pop songs.

‘Now For A Feast’ covers the first year of the band and is amazingly the sixth time the album has been released and/or re-packaged.  This time round it includes extra tracks consisting of unheard demos, live versions and later versions – in total a whacking twenty-eight tracks. There are some great, new sleeve notes from guitarist/keyboardist Adam Mole in the accompanying twelve page booklet too.

From the fifty-nine second ‘Candydiosis’ to the cover of the Sigue Sigue Sputnik’s incredibly underrated ‘Love Missile F1-11’, PWEI steam through an endless foray of high powered compositions.


Titles like ‘There’s A Psychopath In My Soup’ and ‘Black Country Chainstore Massacree’ don’t fail to disappoint and ‘Monogamy’ is sheer bliss.

It’s all good stuff and the prospects of getting bored with any track are slim as many are over before you get the chance.  Paving the way for classics like Def Con One’ and ‘Can U Dig It’, ‘Now For A Feast’ is a little gem.