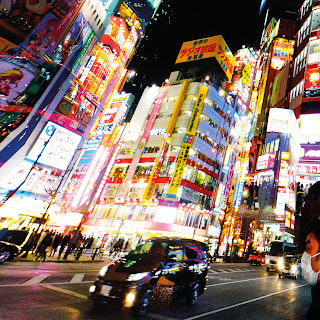 Drop Electric can write a tune or two you know.  The four piece, made up of the children of immigrant families, make music that is both appealing and well constructed.  Mixes of electronica and rock come together with some heavy bass and good solid pop rock songs.  There are nice effects thrown in too, ‘Wack Rapper Admits Defeat’ (aside from being a wonderful sing title) is a short instrumental full of crackling sounds to a near reggae/trip hop mix.  Short and sweet

Lyrics and vocals are provided by Kristina Reznikov, and whilst the words aren’t always decipherable, it does create an air of mystique sandwiched somewhere between Sigur Ros and Elizabeth Fraser.  Whilst the PR claims her vocals soar, they rarely do, but to be honest it’s a claim that is really unnecessary.  Her vocals are competent and polished without over hyping, and compliment the backing with ease.

The title track starts with a monotone eeriness which soon incorporates a strong synth hook and spiralling vocals.  There’s a vocoder somewhere along the line which is unwelcome but thankfully limited which doesn’t detract from an incredibly infectious melody.

‘Blue Dream’ is another strong track with a stomp drum and again very catchy chorus in a song that is destined for bigger things.  Think Cocteau Twins hinged to some good 80s pop and you won’t be far wrong, complete with cries, loops and shouts it’s a fine track, likewise with ‘Starfox’ which has a vocal that seems to be out of time with the music but just seems to work perfectly.

Album closer ‘Among Dying Dreams’ again rises from the embers and maintains an infectious quality throughout.  A five and a half minute instrumental where hints of  Visage, ABC and countless other great bands from yesteryear can be hard against a very unique backdrop of their own.

In essence, Drop Electric are no mugs.  In ‘Waking Up To The Fire’ they display a confidence and maturity which is beyond their years and have released an album which really deserves some positive acclaim.