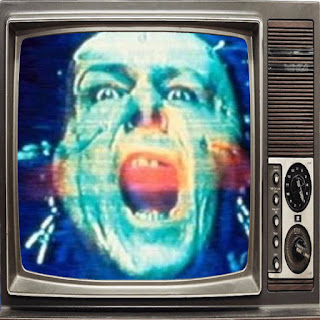 Welsh self-confessed miserablists Radio Europa return with a brand new album. A year in gestation 'To Repel Ghosts' is a sludge of stream of consciousness diatribe against addictions, mental health issues, and the current state of the world. Recorded throughout 2017 in Steven Leigh's home studio, Radio Europa wanted to try and expand their sound from their previous, more striped down basic style and create an album that was more grander in scope. Lead vocalist and lyric writer Simon Tucker decided to pull back on his previous style of vocals, only appearing in segments and sometimes not at all, to let the album breath and represent the scattered thoughts of someone who is suffering from mental collapse.

Angry, witty, and sometimes optimistic, To Repel Ghosts sees the duo advance further into the wilderness.
This is the bands first release on Welsh DIY label Recordiau Prin (label head Ash Cooke also provided the albums artwork) who themselves are at the forefront of the current experimental scene that is exploding in Wales.