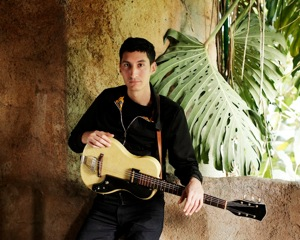 Thousand is the project of French songwriter Stéphane Milochevitch.  Starting to play drums at the age of seven, Milochevitch subsequently picked up many other instruments according to his musical needs, filling the four tracks of his cassette home recorder. He spent his teenage years in Houston, Texas, developing his musical and cultural identity.
Thousand’s debut, ‘Flying Pyramid’ of twelve raw, acoustic folk songs (Arbouse Recordings, 2008),  revealed a sincere, straightforward artist. Though barely promoted, the album was praised by critics and fellow musicians alike, and American songwriter Josh T. Pearson covered and recorded one of Milochevitch’s songs, ‘Song of Abdication’ (here on the new album), which appeared on Pearson’s Mute released, ‘The Singer To The Crowd’ EP.