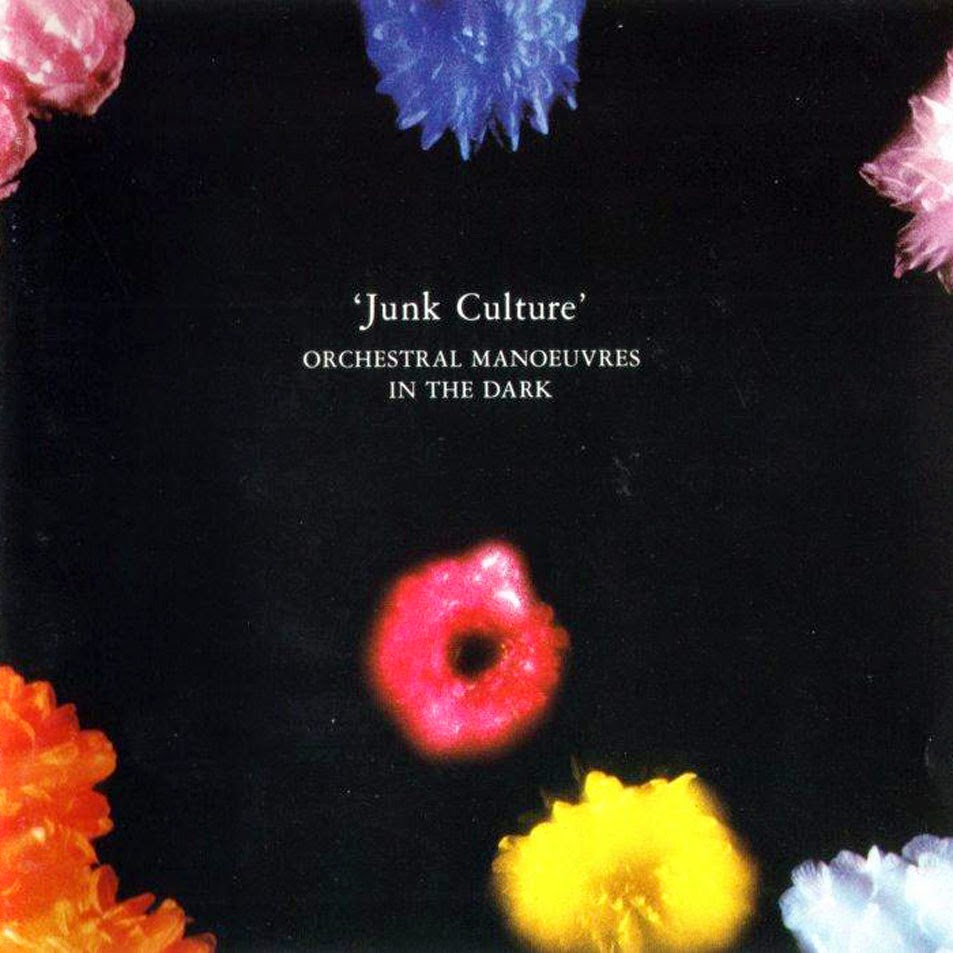 Electronic pioneers 1984 album is given the deluxe treatment.

In 1983, the amazing success that Orchestral Manoeuvres In The Dark had built up with their Architecture And Morality album seemed to disappear in the unloyal world of pop.  Their superb Dazzle Ships album, whilst (quite rightly) being critically acclaimed was less of a success commercially.  A rethink was required, and the following year they returned with the triumphant Junk Culture.

Triumphant because the first single, Locomotion was a huge Top 5 hit.  It was infectious almost to the point of annoying, and nowadays seems so throwaway that it’s untrue, but it put Paul Humphreys and Andy McCluskey back on the pop map.  In terms of a pop song, it borders classic – instantly recognisable from the first few seconds, a chorus that everyone knows and verses that were as memorable as choruses – it was heard everywhere.

On Junk Culture it fitted in nicely because there was no one true style.  The instrumental title track was a strange choice for album opener and given their previous fall from grace, maybe a little rash, but the calculated risk proved to be well-timed.  The albums second single, Tesla Girls is as perfect as pop singles get and an excerpt from which is ironically currently being ‘borrowed’ on a TV advert for a loan company.  The “tes-tes-t-t-t-t-tes” which became a superb strap-line for the track was interestingly not used on the album version but on the single and 12”version the latter of which is included on a superb second disc to this deluxe edition.

Love And Violence is a wonderful slab of electro-punk-pop with McCluskey frequently screaming his vocals over a raw backing.  OMD were never afraid to experiment, in fact it sometimes got in the way of a nice flowing album and created the odd filler.  That wasn’t the case on Junk Culture.

In between slower tracks Hard Day and White Trash comes a calypso effort with a bank of horns in the form of All Wrapped Up. Bizarrely it doesn’t sound out of place.  The album ends with the sugar sweet, musical box sound of Talking Loud And Clear, the second single from the album managed a creditable 11 spot in the charts.

Maybe learning their lesson from the less acceptable Dazzle Ships, they followed the lead of fellow popsters Tears For Fears and put some of their more experimental tracks on b-sides and bonus tracks.  Her Body In My Soul and The Avenue (Locomotion) and Julia’s Song (Talking Loud And Clear) are all included on the bonus cd, but pride of place goes to The Angels Keep Turning (The Wheels of The Universe) which still sounds incredible.  Originally, a one sided single with the album release it is given the digital treatment here and sounds amazing for it.

With 12” versions of all four Junk Culture singles, demos, b-sides and previously unreleased tracks (10 To 1 and All Or Nothing) the deluxe treatment of the album is certainly a worthwhile addition to any music collection whether OMD fan or not.  Junk Culture is simply one of those timeless albums.