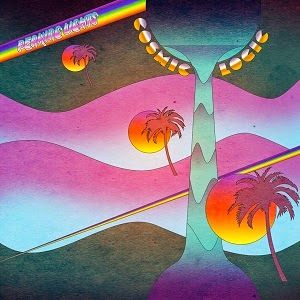 There’s always been something completely endearing about the musical paring of Aaron Coyes and Indris Dunis. What they have created has been interesting, polished and completely enjoyable.  Cosmic Logic is no exception.

The calm and emptiness of Lucifer, the album that gave Peaking Lights their breakthrough has been shelved for an entirely upbeat, twitchy affair which is guaranteed to have you moving somewhere along your body.  Songs are drastically shortened too, maybe half the length of Lucifer, and it all adds to the party that lies in store over its eleven tracks.

The trademark oriental sound and influences are still present and lyrically it maybe leaves something to be desired, but Peaking Lights have never (and will never) be about lyrics.  They’re all about the feel of sounds and textures and how it moves the listener, and on Cosmic Logic they’ve nailed it once more.

Indris’ vocals are stronger than ever and take main stage.  Her sometimes almost childlike tones are a perfect accompaniment to the squidgy, bouncy synth sounds and there’s even an occasional dub effect here and there (please let there be a Cosmic Logic In Dub album!).

From the opening feedback and echoes of first track Infinite Trips which soon develop into near tribal beats, the album has you hooked.  Five or six seconds should be enough.  The glittering kaleidoscope of noise makes way for a heavenly guitar slide which fits flawlessly.

Whilst the chorus to Telephone Call is childish, it doesn’t really matter.  The funky backing complete with whirling effects and Far Eastern influences is wondrous.  It’s lovely, carefree, clinical pop. Everyone And Us immediately re-visits 80s disco/dance and Little Light is perhaps how Daft Punk wished they’d sound if they only stopped disappearing up their own derriere.

The births of Sons Mikko and Marlon have clearly had some sort of influence of Peaking Lights and it’s a welcome one.  Maybe the more poppy direction of Cosmic Lights can be attributed to them.  Dreamquest is exactly what it says, and Eyes To Sea is probably the grooviest little ditty to come out California this year.

On New Grrrls, Dunis recounts her younger life before motherhood and namechecks female figureheads including Joan Jett, Yoko Ono and Lydia Lunch who have clearly influenced her and the feminist fight.  Album closer Tell Me Your Song is slightly out of kilter with the rest of the album with its musical box backing but somehow seems to fit.

Once more, Peaking Lights have come, seen and created yet another auditory delight.