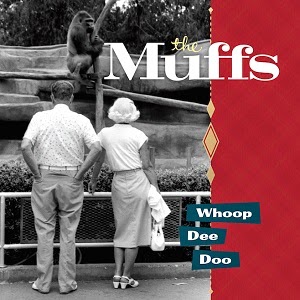 For me, the Americans never really ‘got’ punk.  Despite being the undoubtedly influence for it, they seemed to unwittingly hand over the reins to the Brits for us to morph into something that was quintessentially our own.  Whilst they insisted on incorrectly calling groups like Green Day and Sum 41 ‘punk’ they did become masters of the hybrid – pop-punk.  They just seem to do it like no-one else and The Muffs are fine examples.

With this their first album in ten years The Muffs cram twelve jam-packed, raucous pop-punk tracks into an album which was clearly well worth the wait.  One time Pixie, Kim Shattuck screams and shouts to the point of making sore throats highly contagious over chunking grungy guitars and drums which sound like their skins are splitting with every pound.

Yes, noise is the order of the day.  Not just any old racket though.  The Muffs have created and assembled tracks which are of the highest quality and whilst they are brimming with power and aggression, they also have infectious melodies which are both memorable and distinctive.

It takes the album less than one second to roar into being.  Opener, Weird Boy Next Door has you singing and humming to the melody and Shattuck screeches amongst her fluid vocals and raw guitar sound.  This is music that you want to hear being played loud down at the beach in the soaring heat, or just at ‘volume 11’ in your car.  It just doesn’t get any better.

With all tracks averaging our around three minutes it’s a lesson in how to write compelling pop the easy way – hook, melody, chorus, repeat as necessary.  Take A Take A Me has handclaps, rockabilly drums and yet another thread that won’t escape you. Cheezy throws in an early Beatles harmonica riff, and only on closer Forever does the frenetic speed slow down slightly with an early Blondie sound circa Plastic Letters.