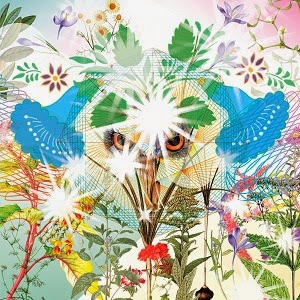 You might (indirectly) know the leader of OOIOO, Yoshimio - she was the inspiration behind the Flaming Lips album Yoshimi Battles The Pink Robots.  She's added an 'o' to her name since then.

It is believed that the word 'gamel' is a type of mallet which instruments are hit with leading to the word 'gamelan' which represents a traditional music from Java and Bali.  Fitting, as the new album from OOIOO contains large amounts of thumping and pounding.  Possibly the Indonesian equivalent of European industrial pop?  Whatever the case, Gamel is inspiring.

Undoubtedly impulsive on occasion, the album exudes power and originality in equal measure.   From the opening of Don Ah with its rising scales it’s clear that this is not an album to underestimate.  An album four years in the making and it’s easy to see why.  Tracks may often be improvised, but the idea behind the tracks which incorporate a traditional genre with their own distorted agenda is fascinating to say the least.

Yoshimio, formerly of UFO Or Die and Bored where she played drums also adds keyboards and trumpet to her repertoire.  Ensuring that the reminder of OOIOO move completely under her lesson Gamel moves in tone and balance as quickly as it does in volume and intensity.  Percussion, musical box soundalikes, chanting and general madcap antics form unique tracks of the highest order.

Gamel Ninna Yama includes prog-rock guitar, brass instruments and synth effects all with the underpinning of tribal sounding beats.  Chimes appear in Gamel Kamasu accompanied by trumpet and familial shouting.  Even hints of western funk are present on Atatawa.

If mind-bending music is what you crave, then Gamel is the album for you.  Originality and traditional sharing the same groove, keeping alive music of historic relevance yet creating something completely new.  OOIOO are adventurous yet respective to their heritage in this captivating and absorbing collection.