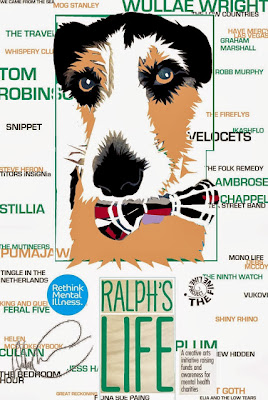 I love Twitter.  I've found some cracking folk both on the hiapop account and other accounts (yes, I currently have a hand in six!).   Some I've met in person, some I haven't, some I will at some point.

I hope one of the latter is fellow music blogger Mike Lindley (aka @fruitbatwalton).  He's doing a rather wonderful thing at the moment.  He's raising pledges via the Crowdfunder website to be able to produce a cd of 40, mostly unsigned, artists.  Click here to see the full line-up.

The proceeds will be going to Rethink Mental Illness in the UK and promoted by The Fine Line Project.

A staggering one in four people will suffer from one form of mental illness during their life.  It could be your Mum, your Brother, your Wife.  I could even be you.  Depression has no boundaries, it can affect anyone. Chances are you know several people who suffer, they might not even know.

This isn't just a case of  'cheering up' or 'snapping out of it', this is a life changing thing.  A thing that physically stops you having a normal life.  It can be devastating in all its forms.

We all have the chance to make a small difference.  The best way I can see is to buy the cd.  It's only £12 for a double, that sounds pretty bloody good value to me, and I really can't see any excuse for anybody not helping.  Details are here.  Do it now.