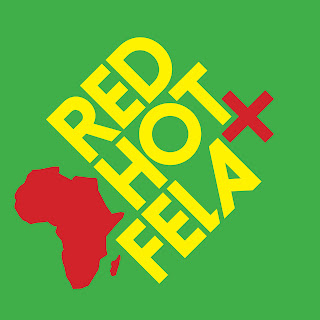 Knitting Factory Records releases 'RED HOT + FELA' on 15 October, celebrating the 75th anniversary of Fela Kuti's birth and uniting an eclectic, collaborative roster of artists from the USA and Africa in the name of AIDS awareness. All profits are going to combat AIDS.

Also to be released on 15 October are these six Fela Kuti reissue CDs:

The release of these CDs will complete the Fela Kuti reissue series by Knitting Factory Records. The complete works of Fela, consisting of almost 50 albums, have been re-packaged, with in-depth track commentaries written by Afrobeat historian Chris May, and released in three batches between March and October 2013.

The first batch of reissues was spearheaded by 'The Best Of The Black President 2', a 2CD collection (KFR1029-2) with a foreword written by Senegalese-American R&B/hip-hop artist Akon. A special deluxe edition of the compilation also includes a DVD of Fela's legendary 1984 Glastonbury concert (KFR1029-5). Also available is 'The Complete Works' of Fela Anikulapo Kuti in a deluxe box - 26 CDs (containing 46 albums) and a bonus DVD (KFR5004).