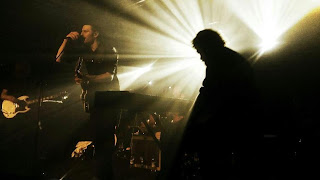 From the outside, Sound Control looks rough.  A lone door in a plain wall down a dark looking New Wakefield Street.  In reality it’s slap bang in the middle of M1 postcode and is surrounded by loads of nice looking (and smelling) cafés, restaurants and bars, and, a stones throw away from The Ritz and Palace Theatre.

Through the door and down a handful of steps is a cosy little bar area with, at the end, one of the most impressive Gents Toilets I have ever seen.  Black floor with sparkles, black ‘brick effect’ tiled walls from floor to ceiling and red columns and pipework.  I visited twice I was so impressed.

The Archive gig was upstairs, the wooden floorboards being the stickiest I have ever encountered – standing still for five minutes meaning a temporarily enforced standing still whilst you peeled your feet away.  The room was small but airy, and they served Guinness.  I was happy.

The small stage, I suspect, is the reason for no support act, presumably dismantling one set of equipment and re-setting another would be difficult in such a confined space/timescale.  Kicking off with ‘Finding It So Hard’ from the album ‘You All Look The Same To Me’, the power is immense, pounding loudly but with the notes clearly defined.  There is very little time for breath as they steam through ’Wiped Out’, ‘System’ and ‘Hatchett’ with seemingly no break between tracks. 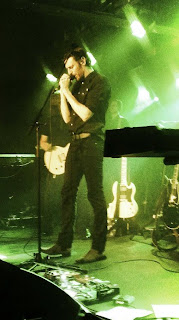 For 18 years, Archive have never entered my radar, and it was only with last years phenomenal ‘With Us Until You’re Dead’ album that I became aware of them.  Their songs are superbly crafted, many starting slowly and sparsely, and, gradually growing into mammoth walls of sound.  Three vocalists, all individual, all very talented add to the mix, particularly Holly Martin whose beautiful tones perfectly compliment the superb musicianship.  If I had one complaint early on, it was that the vocals weren’t quite loud enough, but, come ‘Conflict’ and the superb ‘Violently’ my minor fault was more than rectified.

Blending trip-hop with electronic and post/prog rock, the live sound of Archive is much meatier than the recorded sound.  Roaring drum sounds with throbbing basslines, synth effects and screeching guitars, sweat poured and bodies convulsed on stage.

‘Fuck U’ and the closing ‘Bullets’ had an already effervescent audience bouncing on the sticky floor and punching the air for more.  More they got, with a three song encore finishing on ‘Dangervisit’ and a claim of “We’ve never been to Manchester before, but we’ll be back”.

I’ll be there too!

Published on Louder Than War 20/04/13 -  http://louderthanwar.com/archive-live-review-manchester/