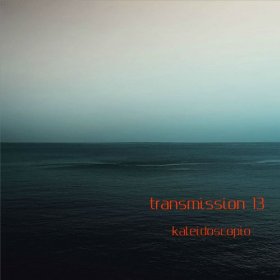 How do you follow your debut album being listed in the Best Of 2011 category by ManchesterMusic.co.uk ?  Quite simple really, you make an album worthy of the same accolade the year after.

Kaleidoscopio, the follow up to 2011’s In Treatment, is the second album from Transmission 13 (aka Maurice Doogan) and contains 14 instrumental tracks of sumptuous beauty.  Described as ‘progressive ambient rock’, its dreamlike soundscapes are quite simply gorgeous.

From the calming opening bars of Reflection it’s engaging stuff – easy on the ear – an appropriate title.  Wider Than Pictures is more upbeat with an instant hook which is central to the whole album.  Nice guitar work and a great ending.  For no reason other than the opening dialogue, Apollo 13 reminds me of The The and Sweet Bird Of Truth, strange really as it’s clearly about space travel and not dropping bombs on the far east!  Again, it’s very easy listening with a looped melody.

I always find self-released albums fascinating.   In the late 80s I predicted that the music industry would implode, and, with the help of the internet it’s done just that, allowing unsigned artists to have their say and get heard.  With a self-released album, everything matters, all is at stake, and unless you’re a fool, every song is made as though it’s the last song of your life.  Kaleidoscopio is no different, it’s passionate and full of ideas.

1976 is again more upbeat, played loud it’s a cracker, but not pretentious.  Lovely guitar work and a subtle ending.  It may just be me, but, I’ve heard a lot of bubbling water and rivers on recent albums, an ebbing tide leads us into Lake.  Maurice has the ability to write tracks which take you off to various locations.  You’re here by the side of a lake, looking across into the mist whilst you walk slowly toward it getting your feet wet.  An angelic voice calls you closer.  Gorgeous.

Influences are spread far and wide – kraut, Bowie, Cocteau Twins and Eno mixed with folk, ambient and progressive.  Pictures Of Lakes And Buildings even has a far eastern sound. The title track is krautrock esque nodding an affectionate wink in the direction of Kraftwerk’s The Model and is one of the highlights of the album.  Powerful synth sounds with avoidance of adding a heavy drumbeat.  I was also led to recall another unsigned solo artist, Benign, whose work and style is very similar, and, whose commitment to his music is massive.

At a time when Public Service Broadcasting are sampling old information footage, so Transmission 13 use a shipping forecast, and, as with PSB, it really works on Malin Head.  Runway Lights is an acknowledgement of a bit of prog, and, Tangled And Wild goes in the direction of drone.

The style and cohesion of the album continues right up until final track, Geraniums, engaging you until the final note.  Kaleidoscopio is a fine, fine album and worthy of inclusion on anyone’s Xmas list.

Published on Louder Than War 7/12/12 - http://louderthanwar.com/transmission-13-kaleidoscopio-album-review/