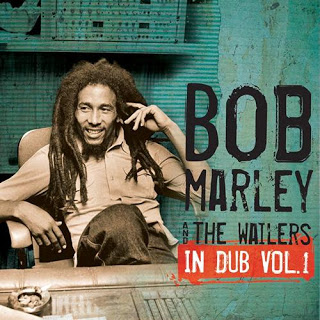 I’m always quite dubious of posthumous releases.  They’re usually come cobbled together attempt at money making that would have the artist turning in his grave.  Despite some reservations, I was intrigued enough to give this a spin as the thought of some good Marley tunes dubbed out was quite a prospect.

In Dub Vol 1 isn’t quite a new release, it was originally released in 2010 as a digital only package.  There are some new versions here though added to some older stuff.  The older ones have appeared on single b-sides in the past and are mainly instrumentals with some cute dubbing going on.

In fact, the majority of the album has very little Marley vocal.  This isn’t particularly a bad thing (I mean that in a good way), as it allows the dub element to come through.  The tracks have clearly been remastered which does add to the overall sound.

Highlights of the album of the quite brilliant Lively Up Your Dub and One Love/People Get Ready Dub – great dubbing, high-hats and horns, very enjoyable as is the album as a whole.  Forever Loving Jah Dub is just sumptuous and well worth the price of the album alone.


Is This Love Dub is far too busy, and, for a newcomer to dub, may well be off-putting.  More silly, pointless echoes than dub.  Unfortunately, Three Little Birds Dub is basically an instrumental and Jamming Version is exactly as its title suggests.  The album might have benefited from not including these tracks at all and possibly having some longer versions as  few of them get beyond 3 or 4 minutes, which makes the album less than 40 minutes, but, the collection is endearing enough to warrant several listens.

There’s very little information as to who has done the newer remixes, further investigation would seem to indicate that Scientist is the chap in question, with maybe Marley and Familyman Barrett doing the older ones.  A couple of the tracks have the quickest fade-outs I’ve ever heard, and, in a couple of cases are pretty frustrating.

The title of the album suggests that there will be more volumes to come and I’d love to see some new stuff mixed by a collection of people – Lee ‘Scratch’ Perry and Adrian Sherwood spring to mind.

Overall, it’s a great album and well worth a listen, far better than the rubbish that was included as  second cd with Legend, and something I think that the great man would approve of.

Published on Louder Than War 20/10/12 - http://louderthanwar.com/bob-marley-in-dub-vol-1-album-review/