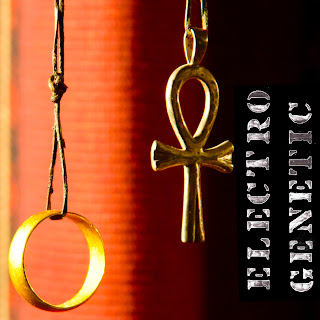 In the world of music, the name Gareth Jones might not be instantly recognisable to many people. However, a cursory glance over the production credits on albums by the likes of Nick Cave and The Bad Seeds, Depeche Mode, Einstürzende Neubauten and Erasure will reveal an ever present name. In these circles, Gareth Jones was/is an invaluable member.

Some forty years after his first foray into music production engineering Metamatic by John Foxx, Jones presents his highly emotive debut, Electrogenetic. You’ll hear ambience and hints of pop together with echoes and reverb which create an almost spiritual experience. Album opener, The Beginning takes lines from the Book of Genesis recited by Gareth in Wesley’s Chapel in Islington and instantly takes the listener on a near religious experience as Trinity involves choral voices and glides by beautifully.

It would be possible to compare Electrogentic to a modern day mix of Tubular Bells and The War of the Worlds but on a gentler, simpler scale. Recorded over a year-long period following the passing of his mother and mother-in-law, the album is about death, commemoration, celebration, separation and transition according to Jones. You can often hear sounds that could be taken from Depeche Mode’s Black Celebration – occasional piano highlights and build-up of basslines on stand-out track Mercury for instance.

Intended to be listened to as one complete piece, the nine tracks lead seamlessly into each other with the listener often not aware that the next track has begun. Taking time to listen to the full album in one sitting is a near magical experience. Always gently simmering, avoiding the urge to bubble over, it takes ambience to the next level as it introduces pattern and form to the underlying tone.

Says Jones: “I wanted to make something that was authentically me, something that was utterly personal yet whose themes would be relatable to everyone. I like to think that’s what I’ve achieved with this album” and, he has created something quite superb here, make no mistake. Think of Electrogenetic as a journey rather than an album. There are highs, lows and moments of pure ecstasy – it is, quite simply, perfect.