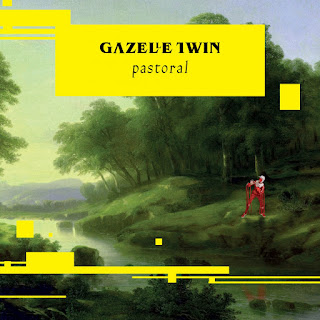 adjective: incredible
1.      impossible to believe.
"an almost incredible tale of triumph and tragedy"
2.          difficult to believe; extraordinary.
And so begins the new album from Elizabeth Bernholz aka Gazelle Twin.  The clue to its success lies above.  As the words of opening opus Folly exclaim – “What species is this?  What century?  What atmosphere?  What government?” – so Pastoral can be summed up as “What the fuck?”

This album is like nothing you have ever heard before.  If it doesn’t hit you immediately, if your brain doesn’t feel like it’s melting and dripping out of your ears, then stick with it, it will.  You head might feel like it’s about to explode, you may be convinced you’re living in a fantasy, another world, a nightmare.  The kitchen sink is probably included in an album of skilfully repetitive sounds, field recordings and genius, the latter making this album a landmark in modern music.

It challenges everything that has gone before – pop, punk, avant garde – you name it, this sets a new standard.  Pastoral is horror hidden in the peaceful villages and public places of Middle-England, a comment on modern Britain set to the background of grinding loops and unimaginable sounds.  Better In My Day remarks on the stature of the youth over a Pastoral characteristic of pounding percussion and basslines and Little Lambs introduces a controlled anarchy in danger of breaking free with broken fragments of hip-hop and house thrown in for good measure.

Pastoral was four years in the making and it’s easy to see why as it gels its fourteen tracks together in a truly mind-blowing order.  Harpsichord and recorder are sampled to create incredible screeches in this hell-on-earth production.  Dieu Et Mon Droit (the motto of the British monarchy = God and my right) comments on the state of the nation and our ignorance to its difficulties and Mongrel includes electronic blips and bleeps over another evil commentary.

Be very scared at Tea Rooms – you will never enjoy your waitress-served hot beverage and cream scone again without constantly looking over your shoulder and wondering what goes on where the eye can’t see.  Jerusalem sounds like it contains snippets of The Blue Meanies from Yellow Submarine or maybe it’s just a devil possessed Punch post ‘disposal’ of Judy?

With recent single Hobby Horse comes maniacal voice and swirling sounds which ingrain themselves in your now permanently aroused ears whilst distortion balances on a knife edge.  Pastoral is not for the light-hearted but instead for the musically hungry, the desiring of the unique with a thirst for true original and a hint of terror and revulsion.

Classic:
adjective.
judged over a period of time to be of the highest quality and outstanding of its kind.

noun.
a work of art of recognized and established value.