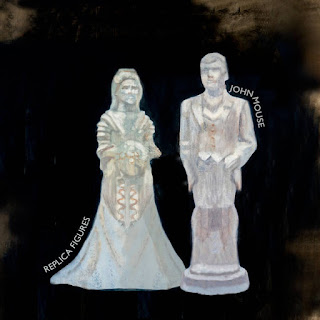 John MOuse – Replica Figures (Keep Me In Your HeartRecords)

Being unaware of an artist can sometimes work in your favour.  There are no preconceptions and no duties to be upheld, it allows you to listen with an untainted ear and honestly decide where the music takes you.

John MOuse is a name you may be familiar with not only with his solo work but also under the name of JT Mouse, a moniker he adopted along with Steve Black (Sweet Bamboo) and with whom he re-unites on Replica Figures for the first time in 15 years.  The album circulates round memories, some good, some bad, some lost and some seemingly inconsequential and often provokes a smile in its honest, black humour.

The 11 tracks are often simple affairs, and clearly hold special meaning to MOuse which may be lost on others but, it is that sincerity which often holds more than a little charm.  Album opener End Of Mankind begins with a pre-programmed drumbeat, it’s maybe off-putting to the newcomer or electro cynic with its 80s bedroom sound.  The hook is memorable and pretty infectious and it somehow keeps the listener engaged.

Boogaloo is funny, but maybe only to the ones of us who grew up in the early-mid 80s.  It cleverly namechecks heroes and events from the era but may not be of interest or relevance to a younger audience.  Bunkbeds And Broken sounds like one of those great ‘nearly’ artists from the same era and in many ways that is where this album disappoints – it seems to be stuck and like a parody album where the humour is often lost.

The spoken word tracks hold more interest, The King And Jesus Ganged Up On Me works well and final track Gladiator Contender is the highlight of the album as it harks back to the 90s sport entertainment show, Gladiators.  It works because knowledge of the show isn’t necessary – it’s a lazy comforting tracks with some delightful backing vocals that lift the song from something that may otherwise have been pretty uneventful.