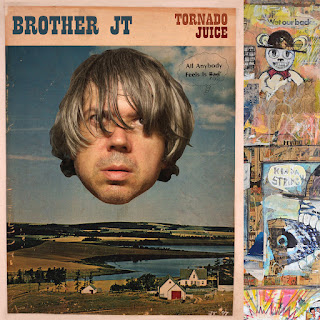 Open it with feedback baby and flush it into an almost Beck-like horse ride on a Pavement adventure. ‘T.M.I.’ is a really nice kick off to the album with its electric guitars and pumping bass and Brother JT singing about his desire to get away from it all. It’s a simple pop tune with no frills and that’s great. ‘Ponin’’ has a lovely 70’s sounding production to it with its acoustics and synths, fuzzy distorted guitar solos and claps and punchy drums. It’s almost how Alex Harvey might have sounded if he were American and could see this gaining some commercial attention if it came out as a single, especially with the mention of kettle chips. Everyone likes crunchy kettle chips.

‘Back To The 90’s’ is a clunky, chaotic tune with a nice charm because it sound so real and grounded. There’s no airs or graces about it with it’s clumsy drums and improvised guitar solos and this is why Brother JT is so appealing. Again with ‘Zabriskie’ it feels like Grizzly Bear rehearsing a new tune for the first time but with Edwyn Collins zapping around in the background with his fuzzbox and maybe even Bobby Conn thrown in there for good measure.

‘Mississipi Somethin’’ is a lazy, swaying love song sounding like none other than Bob Dylan with some cheeky little acoustic riffs thrown into the verses and the occasional Thunderclap Newman chord progressions plopped in for good measure. It seems to morph into Prince or Jimi Hendrix at the end with some nice female harmonies appearing, ending with just Brother JT’s voice speaksinging. Great stuff. The whole album is a crunchy, no-nonsense, straight from the soul affair that hasn’t been over-thought and it glows with that essence of DIY ethic which is something more artists could take note of.

‘Peaks And Valleys’ is a dirty ass rock tune that kicks you in your face as soon as it jumps out and then quickly turns into sounding like The Beatles then back into an almost Led Zeppelin riff-fest. Brother JT really keeps you on your toes with the sheer eclectic mix of styles in one song and it’s great to hear such a carefree approach to music coming through. The double tracked guitar riffs over the McCartney bass are phat and sublime and this is definitely the standout track on the album.

We can sense the spirit of early Bowie in ‘Shasta’ with all it’s 70’s rock sensibility and there’s some lovely whistling in ‘Eureka’ teetering on the dock of the bay with a bunch of jangling guitars harking back to the Scottish Postcard Records era in places. Closing track ‘Oh Me Oh My’ finishes the album off nicely with a simple, stripped back acoustic tune about screwing things up.

Tornado is a genuinely authentic, heartfelt and simple album for people who want to get away and ingest something bittersweet and full of soul. Brother JT has put together this eclectic album in the best way possible and it’s worth anybody’s attention any day of the week. Especially Sunday.