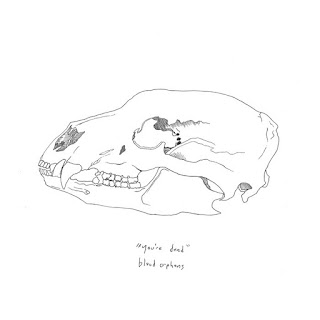 “you're dead” by Blood Orphans is doing God’s work. This album creates a god, designs its will, and then sets out to complete it by curating a mythology through the use epic swells. The whole album makes the best use of dramatic tension between attracting the opposites of big and small sounds together I have ever seen in my life. The first two tracks, “Ra Vs The Sun Bear” and “you're dead" reverberate back and forth between tiny and spiritual to big brassy beautiful moments of epiphany and cacophony, the whole thing reminds me of feeling like climbing a mountain and crying the whole way, until you get the top, out of tears, ready to know what comes next.


The voice on this record, beyond even just the vocals, cannot be contained. On the bandcamp it is written that this music is a “practice in communicating grief and processing loss” and although that is often found to be a theme of common indie music, unlike other artists you can actually *feel* it pulsating from this record. Like the instrumentation which plays with the tension between big and small sounds, some of the vocals on this album are low and gritty but also surrounded with amazing harmonies. The amount of work that went into even just coming up with a song and lyric structure is obvious, before the guitarwork or extra special production even came in. Sometimes you listen to a band’s release and it is just another footnote in their musical career, and sometimes you listen to a record and realize that this is their masterpiece. In “you're dead” by Blood Orphans, we can be sure that this is the latter, and look forward to all future art this project has to offer.