Review - Abatwa (The Pygmy) – Why Did We Stop Growing Tall? 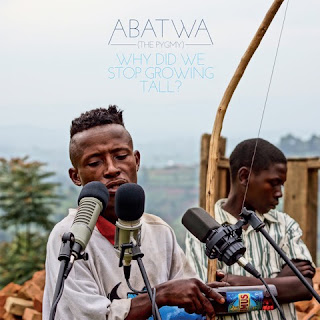 Abatwa (The Pygmy) – Why Did We Stop Growing Tall? (Glitterbeat Records)

A new compilation from Glitterbeat Records featuring one of Africa’s most endangered peoples.

This is the sort of thing that makes ‘World Music’ so fascinating.  Music in its most basic organic form.  Music played on hand-made and /or adapted traditional instruments.  Words sung by people who really have no concern if they are pitch perfect because they sing to express feeling and emotion. This is music for no other reason than to exist as music.

The Abatwa (‘pygmy’) are one of the most threatened races in the World and with it comes music that too is scarce and isolated and which is incredibly compelling.  There is a remarkable texture to their sound largely made up of string instruments including the one-string Umuduli and eleven string Icyembe but also battery operated loop machines which click and beep like a child with a new toy.  Night Street Walker, Who Will Care For My Children? by Jean Claude Nzabonimpa even features found metal and rattle distorters.

This is lo-fi, D.I.Y. music in its (im)purest form.  You can imagine walking into an Abatwa village in the Rwandan borderlands and coming across these people playing their sounds and music to each other and maybe even to themselves.

Songs filled with passion and such emotiveness that it would be hard to peel yourself away until they pack up their sparse backing and move on.  Nineteen year old Rosine Nyiranshimiyimana performs an improvised rap on The Child From The Streets with nothing more than the battery operated loop machine and backing vocals, and the result is stunning.

There are more vocal oriented tracks like I Will Serve by Emmanuel Hatungimana the short album opener AIDS Is Bad and, incredibly emotive tracks like War Song performed by Beatrice Mukarungi a sixty-seven year old mother leading her sons.

As ever with compilations from Glitterbeat, this album is enthralling in the extreme and offers an insight into yet another musical strain hidden away in this huge planet and, as the poignant sounding title track closes the album another gem has been witnessed.
~