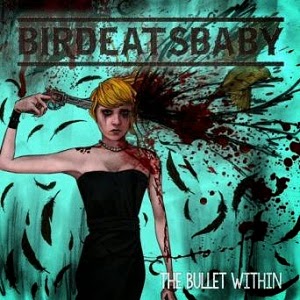 BirdEatsBaby – The Bullet Within (Dead Round Eyes)
CD/DL
Out Now

This is a fine album, make no mistake. BirdEatsBaby have nailed it with their attempt of a punk-rock meets classical meets cabaret effort in the form of The Bullet Within.  Formed in 2008 and with a fan base going under the name of the ‘flock’, the group have funded the album which is nothing short of superbly arranged and produced.

Tracks are complex, sometimes over so, but they have managed to cram idea upon idea into tracks and make them sound like the most incredible soundscapes.  With regular leading parts for violin and piano to accompany the regular instrumentation, The Bullet Within is an album the trio of girls and lone boy can be very very proud of.

Kicking off with recent single The Bullet, the group make their intentions very clear.  Powerful vocal performance from lead-singer and songwriter Mishkin Fitzgerald over a swamped arrangement is impressive to say the least.

Their very unique blend of post-punk-goth underpinned by Debussy tributes and cabaret show-time is inspiring as are their lyrics – check out Drinking In The Day, an alcoholic lament of almost stomach-churning proportion and sadness, or Ghosts and its atmospheric sequestration.

Enemies Like Me begins with a sound-alike drumbeat from Marilyn Manson’s Beautiful People perhaps fitting as his violinist, Melora Craeger guests on Into The Black.  Guest spots also come in the form of Gabby Young (whose One Foot album received a well-deserved 8.5/10 on these very pages last month), who’s strong neo-operatic vocals appear on Spiders.

Perhaps fans of Marc & The Mambas will love this album, it has the same excessive qualities that made Torment & Toreros and Untitled such brilliant masterpieces way before their time.  Is The Bullet Within a masterpiece?  Well, it’s very close.  The band exude confidence which pours from every note and sound.  Whether they obtain mainstream success is a different question, but one that their flock probably won’t care about.

Special mention should maybe also go to Forbes Coleman who recorded mixed and produced the album and surely became an uncredited fifth member.  The dramatic The Hands Of Orlac based on the 1920s horror film is particularly worthy of mention as is the superb Tenterhooks which is probably the album highlight.

Coupled with the lavish cd packaging, BirdEatsBaby have released one of the finest albums of the year.