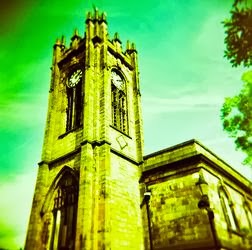 Sacred Trinity was the first church in Salford.  Nestled a stones throw away from Manchester City centre and a short walk from the Arena, it's a beautiful Grade 2 listed building built in 1635 as a chapel-of-ease.

Restored in the 1870s, much of the building dates from 1752 but had more work done as recently as the 1980s when it was given a new lease of life for varying events which included music concerts.  One of its claims to fame is that the inventor of the sport of Rugby, William Webb Ellis, was christened there.

I've just had my first visit to the church, to see the incredible talent of Phildel.  She was supported by local lass Rachel Hillary (and “best friend Abby” on mandolin), a twenty-six year old Mancunian playing a unique blend of Irish folk music and Beat poetry, and a voice that is both individual and very palatable.

With only five songs, she left the mic leaving a lasting impression and the feeling that we’ll be hearing from her again. 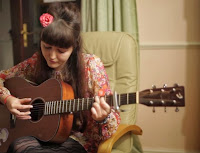 Sitting on pews in front of the Church pulpit the audience ranging dramatically in age gave a rapturous welcome to Phildel before she even spoken a word.  Dressed in a lengthy sweeping dress with her almost as long hair falling around her waist, she opened with the title track from this year The Disappearance Of The Girl album.  It was faultless.  Backed by partner Chris Young on keyboards (and Apple Mac) with Adam (drums) and Luca (viola), not only was her voice on fine form but the band were also superb.

Taking us through the album and also the newly released The Glass Ghost EP, Phildel remained interactive with the audience to their obvious delight, but ‘that’ voice is something quite unbelievable.  In many ways it was ironic that she was playing in a Church, because if ever I heard one, she has the voice of an Angel.
She dedicated The Wolf to her religious fundamentalist step-father who was responsible for her restricted upbringing, and Funeral Bell brought tears to eyes following the explanation that it was written following two nervous breakdowns – “Oh, Mother I’m scared to die….Oh, Father I’m scared to live”.

There were no special effects, no flashing lights, just music and a voice in a Church.

Am I biased about Phildel? Yes, maybe, but with justification.  At Salford we witnessed someone who you will hear much much more of, and we will proudly be able to quote that ‘we were there’. 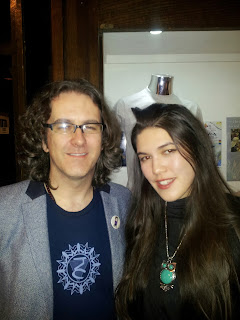