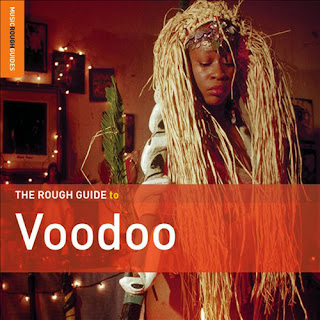 The latest in the long line of ‘Rough Guides’ giving introduction into lesser known musical genres, has arrived in the shape of Voodoo.

I sort of had an idea what to expect with this double cd compilation.  Loads of tribal-esque tracks, big drumbeats and weird chanting and wailing.  I was completely wrong, and, that’s one of the great things about the Rough Guide series.  They are here to present under heard or misunderstood music types and completely change your opinion.  They often succeed.

‘Rough Guide To Voodoo’ is another double cd this time containing twenty-five tracks which chart the expanse of  Voodoo from Africa to Haiti to Cuba to Brazil and even to New Orleans.  The word ‘Voodoo’ comes from the word ‘Vodou’ which is a Haitian religion and has no connection to the occult which was entirely glamorised by Hollywood, so, my expectations were shot out of the water straight away!

Instead, what this collection brings is choral singing and articulate percussion, but, also variations into blues, jazz and brass ensembles – ‘New Orleans Funeral March’ by Steve Gray being a monster of a track nestling in somewhere between the Tom Waits and the intro to the Dixieland funeral march from Bond movie ‘Live And Let Die’.

It’s probably the difference in styles on this collection which makes it so appealing.  Brazilian legends Baden Powell  and Vinicius de Moreas unite their guitar prowess, and, Maria Bethania performs a quite superb ‘Canto De Oxum’ which is both haunting and beautiful.

As with many Rough Guide compilations, there’s also a bonus disc featuring one particular artist, and, Haitian Vodou priest, Erol Josue,  is chosen here.  Thirteen tracks act as a great introduction to him with the pick of the bunch being a incredibly experimental  ‘Nadoki Nadoka’ which really does have to be heard to be believed.