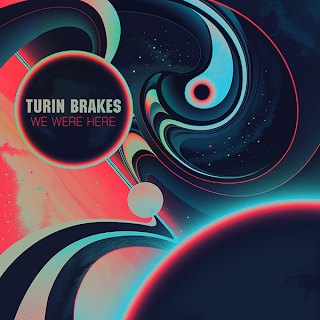 When I first met my wife, she professed a fondness for Walsall’s finest, The Wonderstuff.  I wasn’t over familiar with their back catalogue and asked what they sounded like.  She said they “sounded like The Wonderstuff”, and I knew exactly what she meant.  The same can be said of Turin Brakes such is the sound and style that they have made their own, but, let’s just say imagine Pink Floyd with the occasional guest appearance by George Harrison and you may not be far wrong.

You’ll know doubt know them from 2001’s ‘The Optimist’ album, or, 2003’s hit single ‘Painkiler’ and it’s probably a shame that you may know little else about them.  ‘We Were Here’ from London duo Olly Nights and Gale Paridjanian is an absolute triumph in perfect, concise songwriting and should be contender for one of the years finest releases.

Starting the proceedings with lead single ‘Time And Money’, a well written, catchy and melodious number, the scene is set for an album of twelve tracks, each one as good as its predecessor, and each one equally as memorable.  To be honest, you’d be excused for thinking that this was a Best Of compilation should you be a stranger to their work.  The title track, and its clear acoustics, is a fine example in the art of songwriting, and, its immediate familiarity makes the track instantly enjoyable.  You’ll be humming it long after it’s finished.

The production of the album is sparkling, and the clarity of the music is marvellous, and, Ali Staton must be congratulated for his input.  ‘Sleeper’ has definite nods to the early 70s, and rocks like the best of them, and, ‘Blindsided Again’ perhaps looks in the direction of The Beatles’ ‘The Long And Winding Road’.

It’s a pure delight to hear an album of such lasting quality, and let’s hope that final track ‘Goodbye’ is merely a title and not a threat.