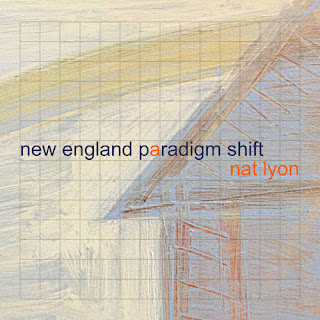 Artists like Nat Lyon are difficult to categorise.  He calls himself punk/folk or anti-folk.  He sounds more like a mix of The Ramones, early R.E.M. (when they were listenable) and They Might Be Giants.  It’s a strange mix, but, it’s one that sounds mighty good.

Based in a 230 year old Connecticut farmhouse that he is currently renovating, Nat is an old-hand at punk now writing songs about fictional characters influenced by his Swamp Yankee history.

It’s probably the only album I’ve ever heard that kicks off with a reprise of what will be the final track.  ‘For  People In Cars n I-95’ is, for the un-initiated, about the freeway that spans from Florida to New England.  At almost 2,000 miles long it remains unfinished for at least another five years.  Claiming that he doesn’t want to die on the road, indicates either it’s boring or dangerous, or both.  An interesting, almost trip-hop start to the album.

Given that the album is solely recorded by one man and his musical talents, it is an enthralling affair.  The post mixing of the album by Chad Methany adds a haunting, apocalyptical feel with reverb and feedback aplenty.

There’s some dark humour on the album, ‘Gin And Visions’ being prime example, accompanied by some epic guitar work and a hook that will nestle itself in the dark recesses of your mind.  ‘Field Notes From Eastern Uplands’ steams along with a backing track that could have been lifted from The Cure, and, ‘Pitched’ could quite easily be early 90s Indie with its cool effects and catchy melody.

Nat’s ability to write interesting lyrics is none better seen than on ‘Fox Sighting 1’ where the words can be best described as poetry, and, his uniqueness is proven on a second braver  version of the song, ‘Fox Sighting 2’ with a backing that is stark and almost frightening.  Wonderful stuff.

Ending on the (almost) title track ‘Paradigm Shift’ (the prequel to the album opener), you can’t help but feel that you’ve stumbled across something rather entertaining.  The music is subtle and simple to start, and, ‘that’ whisper sends shivers down your spine.  Building and building to an indecipherable noise mesh, it’s the perfect end to a very very good album.