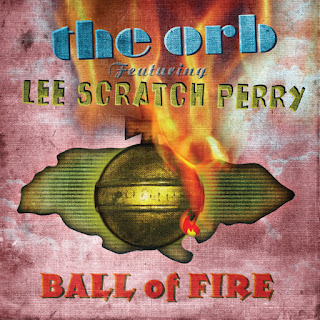 When asked, Steve Barker from Radio Lancashire’s legendary alternative music programme, On The Wire, told me that the sky in the world of Lee ‘Scratch’ Perry was probably “transparent with pink and green lustres”.  He might have a point, the man is clearly bonkers.   And so, with a group who themselves who have also been known to be slightly ‘different’, there would appear to be a collaboration in the making.  Last years album, The Orbserver In The Starhouse, was proof of the theory, in fact, so well went the sessions and recording, that a second album has been borne from the partnership.  Ball Of Fire contains six versions of the song and precedes the release of the June album More Tales From The Orbservatory.

The regular mix of Ball Of Fire is a dub house bounce.  Changes in key are marvellous and Perrys voice sounds just like, well, Perry.  Whether he improvised the lyrics on the spot is open to debate, but anyone that can get away with singing “Shooby dooby doooo, I love you” can’t be all bad.  Yes, he’s as mad as a box of frogs, but we love him too.  It’s a killer track and there’s no reason at all why it couldn’t cross over into the mainstream.  It’s pack jammed with musical tricks and effects and is completely spellbinding.

Following on are two mixes from Deadbeat – a Version and a Dub.  Both give the track a whole new feel.  The Version is slow and easy with Perry’s voice easy to distinguish with the music of Alex Paterson and Thomas Fehlmann given a backseat but with the essence of The Orb still shining through.  The Dub mix is an aural delight.  A lesson in how to make dub mixes, the lazy feel of the instrumentation is put through a superb dub treatment and the result is an absolute joy.

The Dabrye Remix brings in sounds that either aren’t on the original mix, or, were less easy to distinguish in the overall scheme of things.  Sounding like a traditional reggae track in parts and also containing dub elements, it sounds like a completely different track.

There are then two versions from Mad Professor – the I Need Balls Version and another Dub Version.  Again, continuing the lazy, summer feel and both with some brilliant dubbing carrying the instrumental hook throughout.  You’ll be humming the melody for quite some time after the near thirty minute collection has finished.

Published on Louder Than War 28/05/13 - http://louderthanwar.com/the-orb-featuring-lee-scratch-perry-ball-of-fire-single-review/