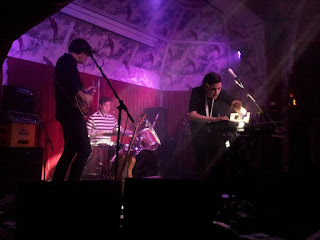 The Deaf Institute in Manchester is my new favourite venue.

Situated on Grosvenor Street just off Oxford Road in the heart of the University complex the building was officially opened in 1878.  From the outside, it’s an almost gothic looking building which contains a chapel arranged in an amphitheatre form.  Inside, it has clearly lost none of its character and is separated into three floors, the highest of which is the venue for performances. 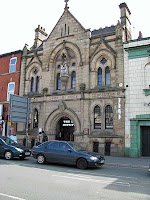 The small audience is here to see Princess Chelsea, on our shores from New Zealand as support act on the UK tour of Mercury Prize Winners Alt-J, and, seizing the opportunity to conduct her own five date mini tour of the UK.

First on stage though is Miles Loveless (aka Pikachunes) also from New Zealand.  He was to play a part in later proceedings, but, first gave his own performance.  In front of surely one of the biggest glitterballs in existence, his lone figure punching the air and wriggling around like a lizard in a tin to his very unique brand of alternative synth pop.  Playing most of his eponymously titled debut album, and probably too young to know he sounds like a cross between They Might Be Giants and Pet Shop Boys, he is confident and performs well-crafted songs in a very entertaining manner.  Tracks like ‘Nervous’ and ‘Just A Boy’ are infectious and well-received.  After a handful of songs, he trots off stage for a well-earned cigarette break.

Part of the audience for Pikachunes is none other than Princess Chelsea herself.  Stood with boyfriend and fellow band member, Jonathan Bree of The Brunettes, she clearly enjoys the performance and chats to members of the audience before disappearing backstage to prepare for her own set. 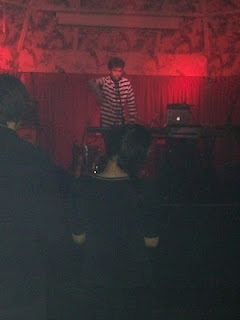 Re-appearing with band members which include the aforementioned Messrs Bree and Loveless (drums and guitar respectively, though to swap places after two tracks!) and a wine glass filled with either a nice Shiraz or the Manchester delicacy of Hot Vimto, she introduces herself as Chelsea “or, my stage name, Princess Chelsea”.  She obviously enjoys playing live, smiling and laughing with the audience and band alike whilst trying to overcome feeling a little under the weather, she immediately gets into her stride with tracks from last years excellent ‘Lil’ Golden Book’ album.

The fairy-tale/merry-go-round/music box feel of the album is beefed up somewhat and tracks like the end of the world lament, ‘Frack’ take on new life.  ‘Ice Reign’ is preceded by the humorous recorded sound of rain and the sound quality is spot-on.  Chelsea stands behinds keyboard and laptop and wears a Triangle around her neck which she occasionally plays.  She even attempts a slurp of ‘that’ wine glass but fails miserably, dripping down the side of her face. 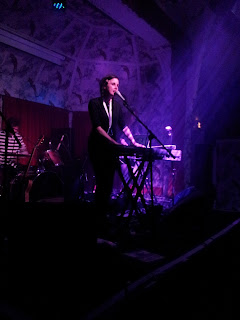 The YouTube mega-hit, ‘The Cigarette Song’, a duet with Jonathan is marvellous, and, every four-year-olds favourite, ‘Monkey Eats Bananas’, is faultless.

There are new tracks too, the new single ‘We’re So Lost’ which is described as “a very sad song”, and, the catchy ‘No Church On Sunday’, both of which should hopefully be on the next album provisionally entitled ‘The Great Cybernetic Depression’ scheduled for release early 2014.

If you have the chance, go along and catch the Princess at one of her remaining dates.  You won’t regret it, and, one day you’ll be able to brag that you were ‘there’.

Published on Louder Than War 21/05/13 - http://louderthanwar.com/princess-chelsea-the-deaf-institute-manchester-live-review/