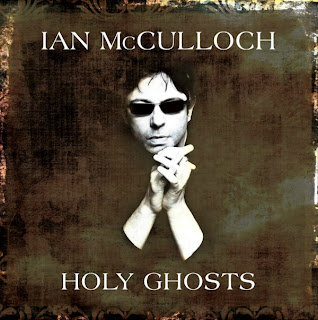 On receipt, I assumed this was one of those ‘my new album with some of my sold stuff just in case you don’t like the new one and so you can remember who I am’ cds.  I was wrong.  Hat you actually have is the ‘Holy Ghosts’ package of two cds.  In a way, Mac has slipped up here, because the each album is of such uncompromising quality that he could quite easily have made it two releases.

Taking into consideration my (incorrect) assumption, I played ‘Pro Patria Mori’ first. In short, it’s an album of quite outstanding quality.  Incredibly catchy songs.  Emotional, brooding and stark, they will make you feel good and occasionally make you ponder – the opening lines of track one, ‘Different Times’, complete with string section are case in point, “Babies come and babies go.....babies live and babies die”.  See what I mean?  There are no holds barred on this.

Several of the songs here could have nestled quite easily on Echo & The Bunnymen’s undoubted finest moment, 1984’s ‘Ocean Rain’, surely one of the greatest albums ever made (if you have never heard it, you should be ashamed of yourself).  Songs with superb structure and arrangement.  ‘Lift Me Up’ is simply wonderful, doing exactly what it says on the sleeve, starting from meagre beginnings and rising to a lovely tribute to a loved one.

Title track, ‘Pro Patria Mori’, complete with angelic choral arrangement is unforgettable, and, I found it slightly strange listening to McCulloch sing words of meaning after listening to him sing about cauliflowers and cabbages thirty years ago, and it’s great, it adds to the journey.

The melodies roll on, ‘Fiery Flame’, The Party’s Over’ and ‘Watch Me Land’ instantly memorable, the later would quite nicely fit into David Bowie’s Major Tim series which is ironic as ‘Me And David Bowie’ is next.  Yes, he’s clearly a hero (sorry), allegedly showing Ian how to hold and smoke a cigarette properly, and, with a line like “how to my overcoat so cool that I could freeze the Sun”, you really can’t go wrong.  There’s a loveliness in the line “Tell me what’s gone on, tell me nothing’s wrong” where he asks where David is, clearly written and recorded before the Thin White Duke’s surprising return this year.

‘Holy Ghosts’ is a live album, recorded almost twelve months ago at the Union Chapel in London.  Playing acoustic guitar himself and accompanied by Ian Broudie (Lightning Seeds), piano/keyboards and a four piece string section, he brings new dimensions to his own and Bunnymen classics.  The PR notes to the album say that the night was enchanting and Ian sang like a diamond.  They aren’t wrong.

Produced by Youth (Killing Joke), it’s stunning. ‘Bring On The Dancing Horses’ is given a completely new lease of life as are ‘Rescue’, ‘The Killing Moon’ and ‘Lips Like Sugar’. The versions are almost faultless with Ian’s voice exuding emotion and power, maybe giving an insight as to where his new direction may lie? New life is breathed into the tracks and they shine. Any criticism? He didn’t do ‘Thorn Of Crowns’ but it’s a lame complaint and one that is purely selfish on my part.
A brilliant album.

Piublished on Louder Than War 23/04/13 -
http://louderthanwar.com/ian-mcculloch-holy-ghostspro-patria-mori-album-review/