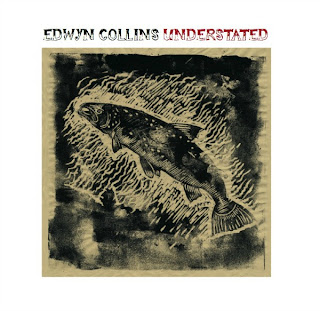 Yeah, we all know about those two things, but, what of Edwyn Collins now?  He’s produced several great albums since then and Understated, his eighth solo one, is no exception.  It’s a set of eleven well-crafted, catchy songs that are both instantly addictive and appealing.

He’s still recovering from a stroke and brain haemorrhages less than ten years ago which have precluded him from playing much more than ‘that’ voice on the album, but, his ability to come up with a great tune certainly hasn’t waned.  Recording ideas and lyrics on tape and then bringing to life via a very accomplished band, the result is a fine collection of genres.  Understated may be the album, but, underrated is what his songwriting talents are, filed away with Babybird under the ‘one hit wonder’ category, but, still pumping out stonking albums.

From the start the album powers along with Dilemma, “that’s me all over”, proving Edwyn’s credentials as a writer of great tunes, aided by a great horn section.   Baby Jean has a cracking blues riff, organ and more horns contributing to a real feel-good song.

Carry On, Carry has an almost Northern Soul feel, and, 31 Years is Motown, with their catchy choruses and foot-tapping melodies continuing a wonderful example in album tracklisting, engaging the listener immediately.  My only reservation would be can these tracks remain as engaging after several listens and can they sustain any longevity?  Time will only tell, but, so far, they’re doing fine.

There’s a welcome breather in the form of It’s A Reason and the autobiographical theme of Understated now starts to shine through.  Too Bad(That’s Sad) is passive aggressive in a another Northern Soul mould.

All the lyrics on Understated are heartfelt and very emotional, and, when Edwyn proclaims “As the years go by, I’m feeling my age” and “I’m a singer (of sorts)” on In The Now, you understand you’re listening to a man who is truly grateful of the position he finds himself in.  When he croons “I’m so happy to be alive” on Forsooth, a lump in the back of your throat appears.

The album ends with Love’s Been Good To Me which is one of the most beautiful songs you will ever hear.  Listen carefully and you’ll catch the sound of Edwyn’s tears.

I’d like to say Edwyn is back, but, he’s never really been away, and, if he keeps releasing albums like this, he’ll soon be recognised for the great British institution that he is.

Published on Louder Than War 25/03/13 - http://louderthanwar.com/edwyn-collins-understated-album-review/