On The Wire - Interview With Steve Barker

It marks the 28th Birthday of the BBC’s longest running radio show – On The Wire broadcasted by BBC Radio Lancashire.  Maybe the number 28 isn’t as significant a Birthday as 18 or 21 or 40 (as the greeting card makers would have us believe), but, given the recent developments in the BBC  Drive For Quality initiative, it is quite a landmark.

In 1984, I was 16.  I listened to the Top 40, I was a convert of electronic music and many a hit single.  I made handwritten lists of the Chart every week.  I listened intently and believed it as gospel.  Back then, I’m pretty sure that Radio 1’s chart show was piped through local radio from 5pm until 7pm, and, I’d always tune in ready for the countdown.  There soon came a time when rumours of ‘fixing’ were rife and I started liking stuff that wasn’t an instant hit.

Sometime during 1985 when I was waiting for the Top 40, I stumbled across On The Wire on Radio Lancashire.  The host, Steve Barker (along with ‘The Boy Fenny’), was playing loads of stuff I’d never heard before.  I thought I knew so much about music, but, quickly realised that there was a World, a bigger World outside the hits of the week.  He played a track, Bop Bop by Fats Comet, still one of my all-time favourites.  Part of it was a sample from People Are People by Depeche Mode (of who I was/am a big fan) – an On U-sound remix, by a chap called Adrian Sherwood.  I loved it.  I hunted it down.  I was hooked.

Over time I became a regular listener to OTW.  Music that was completely new to me on every show.  I didn’t like it all, but, that wasn’t the point – the point was that it wasn’t your run-of-the-mill stuff.  It had feeling, essence and purpose.

I’ve always loved music, and, On The Wire opened up a new World to me.

So, back to the cuts.  'What is not so well known is how these cuts will (not 'could') impact the specialist shows hosted locally.  Effectively, there would be no 'local radio' after seven o'clock in the evening.  Shows will be shared between groups of stations.  For instance, in the North West this group will be the Lancashire, Manchester and Merseyside stations.  There is a possibility that BBC Radio Lancashire will only be responsible for shared programming on a Sunday afternoon.  The high probability is that any output in this slot will be in an 'easy listening' format.  Therefore, sometime between now and April 2013, by which time all the agreed changes will have been implemented, there is a danger that On The Wire will disappear from the airwaves after over 28 years of continuous broadcasting.'

For me and many others like me, this is devastating news, and quite literally, a huge loss.  So much so that towards the end of 2011, I set up a Twitter account, @SaveOnTheWire, to try and rally support.  I tweet links to the show, featured tracks and news.  It's my way of both saying thank-you and trying to preserve something I truly love.

I caught up with Steve Barker recently and asked him what his initial plans and hope for On The Wire were, and, to what extent he thought they had been achieved.
“Basically to play tunes that we either liked or felt should get an airing on radio, basically we are still doing that. I would have to thank a series of managers at the BBC for letting me self-produce the show.” 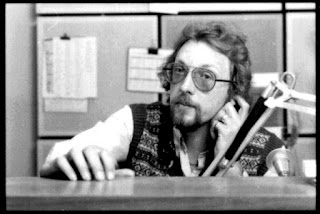 On The Wire was last under threat in the 90’s when a certain John Peel lent his support.  Did you ever meet him?
“Yes, two or three times. Once at Broadcasting House at the Beeb during one of his shows. He did all the usual stuff like play a tune at the wrong speed and listen to the football whilst music was playing. I feel very ambivalent about John’s influence from the time, he was very helpful to us but then again because John Peel was there then he represented the whole 99% of the music that wasn’t played elsewhere – so there was no room for anyone else, and then he became a yardstick by which others were measured. On the Wire was never an imitation of Peelie, we were totally different.”

My introduction to On The Wire coincided with my discovery of On U Sound.  Adrian Sherwood is obviously a good friend, and, you’ve written several sleeve notes for On-U releases.  What in your opinion makes the label so special?
“Well, On U Sound has become a bit of an institution – unfortunately! It started out for the first few years very radical – an experimental UK dub excursion -  but people weren’t really interested. Then it became more hip and the problem there is that people then move on to next big thing. On U has kept a focus on the more radical over time and Sherwood’s new album is probably his best solo effort as he’s created it largely himself rather than relying on other input.”


Once a month On The Wire presents Funkology – how did that come about?  Do you like a good funk?
“This has to be seen in context, as Funkology started out soon after the show itself began. There was little black dance music played on radio. Things are different now with all the numerous shades of Radio 1 etc. However, Pete and Andy still plough their own furrow and are not affected by plugging or fads. Funk is the preacher, jazz is the teacher ……….”

I’ve just reviewed Rough Guide compilations of Ethiopian and Hungarian music for Louder Than War.  The Ethiopian one really surprised me at the diversity of the music.  Are there any other countries that you think are worth looking at?
“All of Sumatra and Java, Columbia, North West Africa – the Sahel.”

What was the first record you bought and where did you buy it, favourite record of the moment, and all-time favourite?
“With my own money? Probably late fifties or early sixties, maybe Buddy Holly. My favourite of all time remains “The Mountains High” by Dick and DeeDee from about 1962. And now listening to a lot of instrumental music, drone and drift. Chilly Gonzales “Solo Piano II” is nice also the recent Robbie Basho reissue on Tompkins Square, and Jeb Loy Nichols “Long Time Traveller” album although it’s only out in Japan.”

Who, or what music excites you nowadays?
“It’s good to hear new generations dealing with drone, drift, process music. Lots of good new stuff coming out of the USA and Europe from people who don’t feel guilty or embarrassed about their influences especially lots of new women artists like Julia Holter and Maria Minerva.”

Listening to your show, your knowledge of music seems infinite – who’s the most famous person in your phone directory?
“I have only a few famous people in my phone book and they probably would not answer the phone to me now anyway”

We seem to live in a world of ‘talent’ shows nowadays, do you think they’ve damaged the music industry or made it a better place?
“They are just a manifestation of the dumbing down of the media and life in general, basically they are pretending that a music biz exists that actually doesn’t exist anymore, they are their own self-contained environments into which people get sucked then spat out. I find people’s fascination with them offensive, and that goes for Big Brother and all its derivations.”

My first article for Louder Than War was called Home Taping Is Killing Music, from a strictly personal point of view, what are your views on ‘illegal downloading’?
“A bit like weed – for personal use only ……….”

Why does Fenny still sound like he’s 20 years old?
“Apart from the regular monkey gland injections, he remains resolutely a fan and young at heart.”

In 2002 Steve absconded to Beijing initially relying of the help of Christiaan Virant, co-founder of the China-based nu electronic unit fm3.   Is he in the UK to stay now, or, is a return on the cards?
“Staying in UK now, hoping to be asked to do some gigs ……… Will return to China for short trips now and again.”

Over the years, the show has featured more and more reggae and dub.  Is there any reason for that?
“Yes, because we love the dub! And its rebel music that is under-represented.”

I’d publicly like to thank Steve and his team for many years of musical education.  Without it, my music library would be a lot smaller (although, my pocket would be a bit fuller!)  With support, I feel sure that On The Wire will be around for many many more years to come.  If you want to do your bit, and at the same time educate yourself, then I’d strongly suggest your tune in to the show every Saturday 10pm until midnight (subject to change!), and check out the Blog at http://otwradio.blogspot.co.uk/ Alternatively, follow the @SaveOnTheWire Twitter account and get the links to playlists, downloads, etc…

As a final question, I asked Steve that if On The Wire is ever a casualty of the cuts, would he aim to carry on elsewhere.  The answer is still bringing me to goosepimples.
“On the Wire will never die  …………..”

Published by Louder Than War 15/09/12 - http://louderthanwar.com/on-the-wire-music-like-shower/