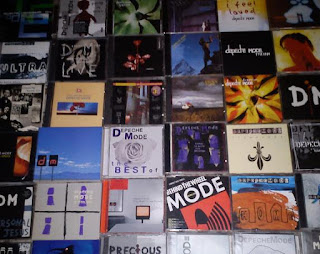 You know who I bloody love? Depeche Mode, that’s who.

I’m not one of these who profess to have been a fan since their first single. In fact Dreaming Of Me totally passed me by (having said that, it passed a lot of people by). I could be really anal and tell you that it peaked at number 57 in the charts, but I won’t. I enjoyed New Life though, it came along in an explosion of tech-synth-new-romantic-futurist stuff, but, I still didn’t think that they were amazing. I didn’t really take a big interest in them until my mate pointed out Just Can’t Get Enough. It was, and still is, a big slab of catchy unforgettable pop as opposed to a classic tune, although it has been covered several times – my favourite by Nouvelle Vague in a cocktail stylee.

It’s all well documented I know, but when main songwriter, Vince Clarke, left to write truly classis pop songs with Alison Moyet or Andy Bell, it seemed like the end of the Mode. Enter Martin Lee Gore, the rest is history.

What Martin has done, in my opinion is written some of the finest songs of modern times. Not only melodious but also some rather wonderful lyrics – take Somebody or Precious. Then there’s Enjoy The Silence, which is undoubtedly one of the finest pop songs ever written. No doubt about it. I won’t argue, because I’m right.

Why Depeche Mode I hear you scream. Oh, that was me? Ok. Well, I suppose it goes back to the previous blog aptly titled ‘Music – Part 1’, I feel their music. It really strikes a metaphorical chord with me. I’ve been through the usual ‘that could be written about me’ scenario, I’ve danced in my bedroom, I’ve even mimed to their songs on my hand-made cardboard synthesizer, but, I don’t mention that nowadays.

They get called dark, black and even Goth, but, they’re just a bloody good group, making bloody good albums (apart from the recent Sounds Of The Universe which I think is very average and still haven’t bought – see I don’t think everything they do is brilliant, just 99% of it), and, are an incredible live act. It’s always been a mystery why they are ignored by the industry though. There came a point in the 90’s when Radio 1 almost boycotted them, and then made up for it by having Depeche Mode Day! They have never, to my knowledge, been nominated for any British music awards despite continually making music for over 30 years with the same line-up – Duran Duran received a Brit in 2004 for outstanding contribution to music despite several line-up changes, being unsigned for the previous four years, and, no Top 20 hit for 9 years. But, I’m not bitter.

If you’re unfamiliar with their stuff, try their albums. Violator is the one people always cite as their best, but, don’t forget Music For The Masses, or, Playing The Angel, or, Black Celebration, or, Songs Of Faith And Devotion, or, oh, just give them a listen and then tell me they’re not pioneers.

There, was that enough? I’m sure I’ll say more about them. They’re not Gods, they’re just bloody good. Their music has helped me through some pretty shitty times, and, in a few instances, influenced some of my poetry.

They are my cup of tea. And cream scone. With jam.
Posted by hiapop Blog at 21:32 No comments: 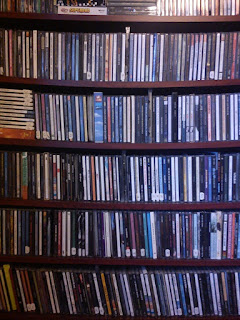 If music be the food of love, PLAY ON!

I’ve thought about blogging about music, and what it means to me, for quite a while. I could probably go on forever. I may well do.

Where shall I start? At the beginning? Maybe just a ramble, or three.

First and foremost, it IS a huge love. When you can ‘feel’ music rather than just listen, then you have found something very special. It is a love, a passion, good, bad, anger, sorrow, sex. It’s all of these things and more. It’s important not to dismiss anything. I once heard some singer or a critic in the 80’s say that if someone had gone to the trouble to record something, the least we can do is give it at least one listen. I always remember that, and, unless it’s particularly awful, I stand by it. I’ve heard some real dross of late, but, I’ve given it the honour of my aural attention – although maybe never to listen to it again!

The thing is, if it moves you, you like it. If you like it enough, it doesn’t matter what it is or who sings it. I used to present a show on community radio and, one night played Nine Inch Nails followed by Nat ‘King’ Cole. I love both, so why shouldn’t I play them? An old acquaintance of mine would refuse to listen to any electronic bands because he insisted they had no musical merit. The fool.

I like some pretty obscure stuff I have to admit, but, there is far more obscure stuff somewhere. I also love a ‘classic pop song’ – file under Abba, or 80’s New Romantic, or, well, anything, does it really matter as long as you like it?

I could list my favourite artistes, but, I’d probably miss some out. I used to think I knew a lot about music, then I met my wife and it all started again. We both love finding new stuff, the internet is a blessing to uncovering gems, and, we never dismiss anything. Well, almost anything!

So, what shall I do? Featured artistes, favourite albums, today’s choice? Tell you what, like discovering music, I won’t have any agenda. I’ll write what I write when I write.

From Shakespeare's Twelfth Night, 1602:
DUKE ORSINO:
If music be the food of love, play on;
Give me excess of it, that, surfeiting,
The appetite may sicken, and so die.
That strain again! it had a dying fall:
O, it came o'er my ear like the sweet sound,
That breathes upon a bank of violets,
Stealing and giving odour! Enough; no more:
'Tis not so sweet now as it was before.
O spirit of love! how quick and fresh art thou,
That, notwithstanding thy capacity
Receiveth as the sea, nought enters there,
Of what validity and pitch soe'er,
But falls into abatement and low price,
Even in a minute: so full of shapes is fancy
That it alone is high fantastical. 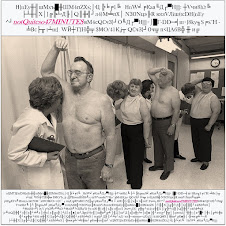